Love on the TTC

I sat under the brightly-lit overhang at Kipling Station, waiting for the 45 to take me to work.  The night was bright and living, a perfect urban evening.  A girl sat on the bench next to me, hugging her knees and hiding her face.  A boy sat on the bench next to her, trying very hard to look the other way.  When the 45 came, he mumbled something to her and walked off.  She dried her eyes and followed him.  I followed them both onto the bus.  They sat together and I sat across from them and pretended to read. 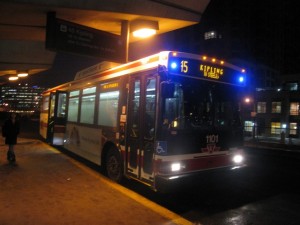 But then one of them spoke to the other.  And the other said something back.  And they were talking.  I couldn’t understand what they were saying, but I could feel it.  I could feel the sadness in the girl’s voice and its mirror in the boy’s.  The girl fidgeted with the boy’s backpack while she talked.  The boy started to look at her face instead of the floor.  They sounded defensive.  They sounded accusatory.  But they kept talking anyway, even though it looked like the words were making them feel worse.

Then there was a sudden and startling change.

The girl threw her arms around him with a sudden sob.  The boy squeezed her tight and said something loud and affectionate.  Something that spoke of promise.  The girl laughed.  The boy kissed her on the mouth and she melted into it.  Others on the bus grew embarrassed.  I grinned at them.

Thank you, you delicious people who refuse to settle for sadness and broken relationships.  Thank you for sharing peace with each other in a public place so I could watch and remember that peace is out there for anyone who wants it.

And thanks for wanting it.