When birthing our first and second children, Ruth coped through medical technology.  Both experiences were mostly negative, which I guess is what we were expecting anyway.  I mean, who sets out to try and enjoy labour?  Even the name we give it–labour–suggests that it’s not going to be a fun thing. 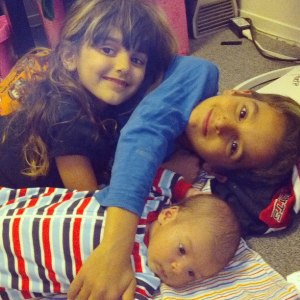 So for our third child, we wanted to try something different.  We got hooked up with the amazing wonderful people at Kensington Midwives.  Their care and nurturing concern for us and the nascent little human freed us to look at childbirth in a different way.  No as a medical condition to deal with, but as an act of creation to enjoy and experience.  So when the contractions started on Thursday, April 25, Ruth was excited to greet them with Zen-level mindfulness.

Ruth played with her contractions as they grew and spilled over onto Friday.  She would see each one coming and, instead of bracing against it, she would breathe and watch.  She would mentally acknowledge the contraction, thank it for preparing her body for birth, and gratefully send it on its way.  And it worked.  We spent the day doing all the same things she had been doing since before the pregnancy began—walking, jogging, taking the stairs, getting hot oil massages and having wild sex.  Pretty much normal life for us.

In the wee hours of the night, Ruth woke up.  The contractions had been steadily growing in intensity and consistency and had reached a point where Ruth was having some difficulty managing while in bed.  She woke her vigorous husband at 3:00am, who drew her a bath and vigorously went back to bed.  Ruth spent half an hour in the tub, rolling with the contractions as they went through her.  After a time she got out and started pacing the house, kneeling, squatting, going on all fours, searching for a position that would give her a bit of an edge as she dealt with the tension.  And even though she had to move around the house and use all of her mindfulness to get through them, they were bearable.  Not only that, it was enjoyable and she was glad to have the opportunity to face them alone.  She woke her husband at 4:20 and they called the midwife.  The time was close.

She almost called too late.  Our on-call midwife, Sara, was half an hour away.  Sara arranged for Houley, another wonderful midwife from Kensington Midwives, to come as well, because she was already in the area finishing up another birth.  Houley arrived just as Matt finished setting up the bed for birth.  She did all the lovely midwifery stuff that midwives do, and told Ruth that if she felt like pushing she might as well go ahead and do it.

Sara, our main midwife, arrived at 5:00am, jogging with her big backpack of midwife gear.

Sara caught our son as he came out and handed him to Matt who rested the child on Ruth’s belly.  He was warm and slippery, covered with the broth he had been cooked in.  And that was it.  There he was.

Out other children were born in good, modern hospitals—the first in Canada, the second in Pakistan.  Both were very safe, highly professional places.  Sanitary, organized, business-like.  Both births were very much like watching a mechanic work on your car.  There was no magic, just mechanics.  We didn’t touch our children until they were appropriately cleaned and prepared.  And even then we had to give them back so they could endure some time under that blindingly warm light with that odd goo on their eyes.  The doctors who delivered our children disappeared immediately after it was over.  Sara stayed with us for hours.  The doctors told us what choices to make.  The midwives gave us information and asked us what choices we wanted to make.  In the hospitals Ruth was a patient with a condition to be cured.  With the midwives, she was a holy person creating another person.

Sara and Safire at Kensington Midwives completely blew our minds.  We never expected the level of care they gave us.  Because of them and all the other midwives and students and staff at Kensington Midwives, Ruth not only endured her pregnancy and labour, she enjoyed them.  Labour stopped being a painful thing to get through, it became a rare and vibrant experience to drink in.  It was not labour.  It was birth.

That’s our story. We cannot thank the people at Kensington Midwives enough. Thank you for showing us how powerful a mother can be. Thank you for being a part of our person-making project.