Review: The Pillars of the Earth 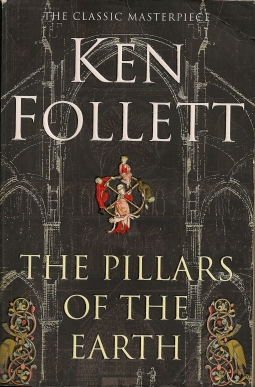 “The small boys came early to the hanging.”

My mother recommended this to me ages ago. I meant to read it. Really, mom, I did. But I forgot. I picked it up recently on a whim and did not remember a thing that my mom had said about it. And I’m really glad about that. Because if I had known what it was about, I probably would have left it alone.

The Pillars of the Earth is a historical fiction about cathedral building.

Let’s be honest, it sounds crazy-boring. Most churches are boring. Old churches are even more boring. Building old churches sounds so boring that I feel like poking my eye just to get a distraction. And on top of all that, the book is nearly a thousand pages long. Wow.

I’m so very glad that I had forgotten what the book was about.

The author, Ken Follett, grabs you by the throat in his first line. And he doesn’t let go until the book is ending. His story is huge and he gives you characters to love and hate by the handful. And then he puts those characters through the grinder. What else could you ask for in a novel?

In the end, the novel is about the inevitability of human suffering and the unbeatable human spirit that has been slowly, painfully, but assuredly making the world a better place.

The Pillars of the Earth is a great read. Its scope is huge, dealing every human struggle from intimate marital relationships to battles between kings and popes. Pick it up. You’ll love it. I swear.

One Comment to “Review: The Pillars of the Earth”